The following is an account of the uprising in Kurdistan in 1991 together with an historical critique of the Kurdish nationalist parties. It buries the lies of the western media which presented this proletarian uprising as the work of nationalist parties in the north or Shi’ite religious fanatics in the south.

The great popular uprising of the exploited of Iraq in March this year threatened the aims and interests of both contending sides in the Gulf war. From Kurdistan to southern Iraq the poor rose up against the Baathist/Fascist regime and against the consequences of the war created by both this regime and the coalition allies. The allied coalition of western capital – particularly Bush, who was worried about extending the war into another Vietnam scenario – stopped the war in order to allow Saddam to crush this uprising. Essentially, they didn’t want a successful uprising because it would be an inspiration throughout the Arab world – and probably elsewhere. The Saudi government was especially worried about this as the Iraqi uprising – in the form of placard carrying demonstrations – had already begun before the ground war got underway. These demonstrations on the whole condemned both sides, although in some pro-western sympathies were expressed – for example, a demo with photos of Bush held aloft: this didn’t mean that the demonstrators were for Bush like that, merely that their hatred was so intense that they were prepared to use anything and anybody to express that hatred. Sadly, though the vast majority were not pro-Bush, many had illusions in being ‘saved’ by the West.

Saddam was prepared to give in to all the coalition’s conditions in order to crush the uprising and stay in power. His fascist regime was taking revenge on the uprising for losing the war. That’s why, in a very barbaric way, he attacked the very soul of the uprising from Basra, Dewania, Kabala and Najaf to the’ Kurdish cities of Kirkuk, Sulliemania and Hawlir. Like a butcher’s shop they had on display the carcasses of Turks, Arabs, Assyrians and Kurds. In that sense it was an international, and not just a Kurdish, affair: a truly public and popular uprising. 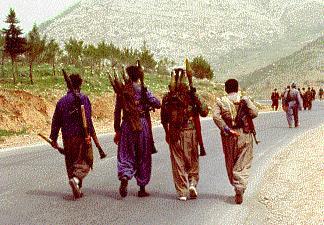