MOST VIEWS OF AKRE

Akre is located 100 km East of Duhok, 25 km from the Ruvea intersection, on the way to Erbil and the Barzan Region, with a population of approximately 90498 .

Akre is located 100 km East of Duhok, 25 km from the Ruvea intersection, on the way to Erbil and the Barzan Region. The town was built on the side of a mountain range by the Kurdish Prince Zand in 580 B.C. Akre is rich in historical sites, such as temples, statues, and ancient buildings, and mineral springs can be found near the town.

Akre is a breathtakingly beautiful little historic town and one of the gems of Kurdistan. Located at the edge of the Nineveh Plains, it was traditionally a mixed town of Muslims, Jews, and Christians and was part of a string of similar settlements such as Shush and Gondik nestled against the same mountain range.

Nowadays, Akre consists of a historic old quarter tucked along the ridges and valleys, with the growing new neighborhoods sprawling out downhill in the flatlands that lead to the Nineveh Plains.

Akre’s modern political history began when the Ottoman Empire urbanized it to serve as the seat of its own eponymous district at the end of the 19th century.

Since then it has shifted between Mosul and Duhok governorates as the Iraqi government attempted to gerrymander districts with large Kurdish populations into governorates where they would be minorities. A large security fort was established by Saddam Hussein as an administrative center for the genocide, part of a network of identical forts such as those at Nizarke in Duhok city and in Spilik overlooking the Harir plain.

The Akre Citadel lies on top of the mountain the town is built on, about 450 m above the valley. It was built by Prince Zand 580 B.C. It consists of several generous built levels; the upper level is known as the Prince’s Residence, the middle was used as food storage, and the basement has a round meeting hall and a flat rock in the middle. The citadel has four pillars, a water cistern and an eagle-like room which is called The Jail. 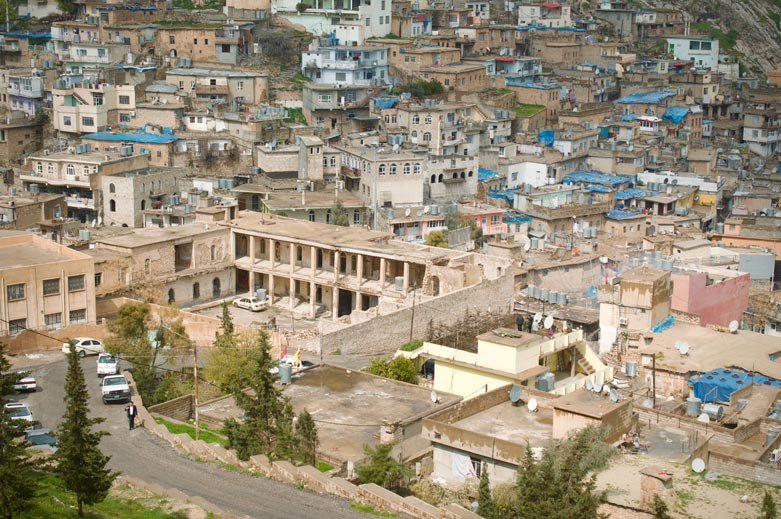 This beautiful site is on the foot of Peris Mountain, 8 km East of Dinarta and 32 Km from Akre. From a mountain gorge water flows over a 50 meter high waterfall and into willow trees. There is another water resource that flows from the same mountain. Picnic areas are set up for tourists to enjoy the scenery.

Girbish is a village at the foot of Peris Mountain, located 23 km north of Akre, and 2 km west of Dinarta village. At the tourist site above the village, six wells flow under a grove of walnut trees, creating a beautiful shaded area that is a pleasure to visit.